News from around the Cowichan Valley

Re. the expansion proposal for Vancouver Island Motorsport Circuit

I am writing this letter to ask you to once again decline Vancouver Island Motorsport Circuit (VIMC) expansion when you meet with the public on December 9th. I would have been there to make a deposition, however I am out of town on a trip booked before the meeting date was announced and so I write this letter instead.

I was shocked to find out that this issue has resurfaced after the wonderful leadership position most of you took in declining VIMC’s proposal a few months ago. I have also been dismayed by the scare tactics that have been used to compel you to turn your votes around to support the application. From all accounts that I have read, these scare tactics like multi-million dollar lawsuits are unfounded.

Although there are many reasons that I agree with in terms of why this proposal should be turned down once and for all (more carbon spewing into the atmosphere, the privileged nature of the sports track and club, noise levels and other impacts on the environment), the one that is closest to my heart is about respecting Indigenous rights.

As has been made known to me by some Quw’utsun (Cowichan) people, and as you are probably aware, the site of the proposed expansion is extremely close to the area sacred to the first peoples of this valley. Known as Ts’uqwulu, the site figures prominently in the origin story of the Quw’utsun. It is also actively used for present spiritual and sustenance (food gathering and hunting) purposes.

Given how Quw’utsun people were dispossessed of their lands through past colonial practices, and that the proposed site lies in unceded traditional land, there is a real opportunity now for North Cowichan to engage in reconciliation through measures aimed at healing the wounds of the past. To me, a major measure towards reconciliation would be to respect the rights of the Quw’utsen by declining the VIMC expansion application.

Although I am in the jurisdiction of Duncan and not North Cowichan, I nevertheless write to you as a concerned citizen of Quw’utsun Valley, as a hwunitum, ally and friend to the Quw’utsun and for future generations who would be upset about the moral and ecological implications and consequences of approving this proposal.

I ask you to be bold, visionary, to act in nutsamaat shqwaluwun  (meaning in Hul’qumi’num, “working as one, with one heart and one mind”) by declining the VIMC application.

Introducing the reFRESH Marketplace. Come on down to your new grocery store located next to the Garage at 360 Canada St. We have half-price surplus produce, frozen gourmet dinners, dried fruit, frozen smoothie packs, and locally-produced gifts. 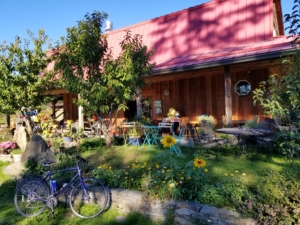 This is my inaugural column for CowichanValley.org, and I am writing it in the homeland of the Quw’utsun peoples (Cowichan Tribes First Nation). I am grateful to Cody Wicks for approaching me to write periodic columns on issues affecting all beings who rely on a healthy Quw’utsun (Cowichan) Valley to survive and thrive. I plan to write about Quw’utsun Valley issues and solutions from an intersectional perspective (that is from a broad-based perspective where human rights, Indigenous rights, ecology, environmental and social justice all intersect and where each impacts the other). However much of what I will write about will likely be about Duncan because it is where I live (I don’t drive, which means I spend a lot of time working and living here and so I feel my ability to write about topics I plan to explore is directly related to what I am witnessing and experiencing in the world immediately around me).

I felt it important to write this initial piece on the heels of the latest release of the global report on climate change by the Intergovernmental Panel on Climate Change (IPCC). These reports have become an essential barometer on how well or how badly our civilization is doing in the era of the climate crisis. This report focused on climate change in relation to land use and food security. These topics are BIG matters globally and we face them here in the Valley on a day-to-day basis as the area continues to develop in the face of climate change impacts. We are very fortunate to live in a fertile region, where a sustainable food system is within reach. However, with successive droughts and increasing temperatures in the region, poverty and homelessness and addiction, we are feeling the pressures here and so all is not well.

Yet, I believe because we are bounded geographically by the valley, because we have such richness in the soil at our finger tips, because there is such a profoundly deep and powerful Indigenous presence with great possibilities for true reconciliation, and because there are so many people who truly care about the land and their fellow humans and other beings, we are well placed to tackle these issues locally and regionally with open hearts and minds.

I look forward to sharing more with you as we move together through this journey.

Welcome to CowichanValley.org and our first blog post through the member dashboard. Our members are our news writers, and anyone who is a member can make a blog post here from their profile. This includes seasoned journalists, writers, researchers, advocates, and more. This is a place to write the new story; both the news stories, and the other aspects of story that we need in the world right now. Everyone who is a member on here is saying they agree with the core values and intent of this group: To create a sustainable future here and in the world by advocating for achievable, important aspects of change. This is an open, consensus-driven document that we invite anyone to get involved with creating and proposing changes to then circulate back through the membership. If you would like to help evolve and grow our vision and advocacy mission statement, please contact info@cowichanvalley.org!

The idea here is to bridge community, and use the internet to create connection in real life, on the land. We are honoured to be here on Cowichan Tribes territory, and to work together towards unity and reconciliation.