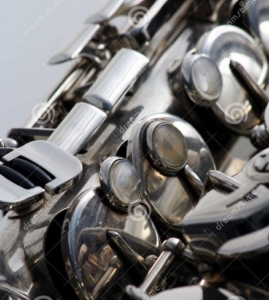 Her name was Joan. In my opinion, this was not good enough. I wanted it to be Trixie or Lola. She needed a party girl name. From the moment she stepped into that bar, all eyes were on her.

She removed the hat that had protected her hair from the rain and tossed her curls around to fluff them up again. She wore retro rhinestone earrings. She removed her coat, placing it just so on the chair she chose as hers and revealed the dress.

Not too many gals attending this Blues Jam on a Thursday night wore dresses. In fact, most were in jeans. It’s a casual night, in a regular sort of bar, but here is Joan in a dress. It was white with black polka dots, highlighted with a black patent leather belt and matching shoes.

She lived nearby, so she had walked over, and the rain had managed to soak the back of her skirt. She remained standing, then, for quite some time, occasionally swishing the wet fabric back and forth in an effort to dry it.

She didn’t mean to attract attention, she just did. And she swayed in time with the music. That skirt with its swirling polka dots drew every eye in the place, and her movements morphed into slow motion as we watched. Swish. It flowed one way, turning dots into lines as the fabric moved with the beat of the music. Swish. The other way, still compelling viewers and Joan danced with it, a vision of happiness lost in the music.

Occasionally, the mood would strike her to play some pull tabs, and she would dance her way over to the coin operated machine, then dance as she stood by the table checking out her winnings, and danced her way over to the garbage can to dispose of the refuse.

If she passed a table that had an empty beer bottle on it, she’d sashay it over to the bar and place it with the other empties there in front where regulars had learned to return their bottles, I guess, or where it was handy for the servers, or both.

Now she headed up to the dance floor, and all by herself she would groove to the blues like no one else existed. She danced as though the place was empty, and it didn’t matter that the band was right there, inches away, grinning at her enthusiasm for their music.

A young man stopped beside my chair and leaned on the counter as he shot some video with his phone.

I thought he was filming the band at work – great music it was indeed. But no, he was capturing footage of Joan dancing.

“I need to show this to my granny.”

A couple of other gals came in and with no chairs available, decided to join Joan at her table. She would have to share – the place was packed now. It was those two women who provided me information about this amazing party gal. Joan had ordered potato skins and nibbled away on them, careful not to destroy her perfectly applied ruby red lipstick.

Evidently, Joan had arrived in the valley many years before. She divulged the year that she’d moved here with her parents, and told them her age at that time. With this information, we were able to do the math, and were astounded. Joan is 91 years old!

Eduardo Sousa This place we call home: the Quw’utsun Valley
Scroll to top